Oreoscoptes montanus
Passeriformes
Members of this diverse group make up more than half of the bird species worldwide. Most are small. However their brains are relatively large and their learning abilities are greater than those of most other birds. Passerine birds are divided into two suborders, the suboscines and the oscines. Oscines are capable of more complex song, and are considered the true songbirds. In Washington, the tyrant flycatchers are the only suboscines; the remaining 27 families are oscines.
Mimidae
The Mimids compose a relatively small New World family. Well known for their elaborate vocalizations and mimicry abilities, they often sing repeated phrases within their extended songs. Mimids are medium-sized songbirds with strong legs, long bills, and gray or brown plumage. Many have streaked or spotted breasts. Most forage on the ground, and use their long bills to dig in the soil. They seldom form flocks, and are found in pairs or family groups. They eat a combination of animal and vegetable matter, with more insects and other invertebrates in the diet in the spring and summer, and more nuts and berries in the fall and winter. They usually nest in dense, low shrubs, and both parents help build the nest, incubate, and care for the young.
Fairly common summer east, casual west.
Source of Bird Audio

Sage Thrashers are light-colored, streaked thrashers, with long, strong legs, long tails, and pale eyes. They have straight bills, which are shorter than those of other thrashers. Sage Thrashers are slightly smaller than American Robins, with light, gray-brown upperparts with light streaking, and buff-to-white underparts with heavy streaking. They show white corners on their tails in flight.

The male Sage Thrasher performs an impressive flight display during the breeding season. He zigzags swiftly over the sagebrush, and then lands in the brush with his wings held up. Sage Thrashers spend much of their time on the ground, and, when disturbed, often run with tails cocked up, rather than fly.

During breeding season, Sage Thrashers eat mostly insects, including grasshoppers, tent caterpillars, and beetles. From late summer into the winter, they eat berries and other wild fruit.

Sage Thrashers are monogamous and both sexes help build large, bulky nests, framed with sticks and lined with fine grass and hair. The nest is usually located in or under big sagebrush or three-tip sage plants. Sometimes the thrashers construct shade platforms over the nests. Both parents help incubate 4-5 eggs for about 12 days, and both feed and brood the young for a week or two after they hatch. The young leave the nest about 10 days after hatching, after which the adults may raise a second brood.

Migration of Sage Thrashers is short-distance, and can be somewhat unpredictable. Sage Thrashers generally winter in the high deserts of the southwestern US and northern Mexico, but some birds may winter at the southern edge of the breeding range and may concentrate in areas with abundant berries. They arrive early on the breeding grounds, and depart early as well.

Range-wide, Sage Thrashers have dramatically declined in many areas and have been extirpated from some. The species is listed as a species-at-risk by the Gap Analysis Project and Audubon-Washington and is a candidate for endangered-species listing by the Washington Department of Fish and Wildlife. Much of Washington's sagebrush habitat has been converted to agriculture, and the remaining habitat is becoming increasingly fragmented. Sage Thrashers are still common in appropriate habitat, and they may be able to tolerate fragmentation better than some species. However, where there is introduced cheatgrass, shrub-steppe becomes unattractive to Sage Thrashers. Thus increased protection of sagebrush is needed to assure that these thrashers remain common.

Sage Thrashers are locally common breeding birds in eastern Washington sagebrush habitats from the end of March to mid-August. They avoid areas dominated by cheatgrass, but are fairly common along Yakima and Umtanum Ridges, on the western half of the Yakima Training Center (Yakima County), and along the Old Vantage Highway between Ellensburg and Vantage (Kittitas County). West of the Cascades, they are casual to rare migrants in spring. 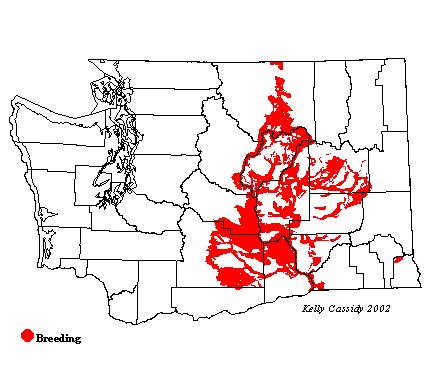