Larus hyperboreus
Charadriiformes
This is a large and highly varied group of birds that do not have many outward similarities. Most are water birds that feed on invertebrates or small aquatic creatures. The order is well represented in Washington, with seven families:
Laridae
The family Laridae is made up of birds closely associated with water. Distributed throughout the world, representatives of this family nest on every continent, including Antarctica. Most are long-lived birds, many of which do not breed until they are three or four years old. Most are colony nesters and nest on the ground. Clutch size is generally small, varying from one to four eggs. Both parents incubate the eggs and help feed the young. The young typically hatch covered with down and stay in the nest for a few days, after which they leave the nest but stay nearby. Most, especially in Washington, raise a single brood a year. This group is known for its elaborate displays in the air and on the ground.

The Washington representatives of this family can be split into two groups, or subfamilies. The adaptable gulls are the most familiar. Sociable in all seasons, they are mainly coastal, but a number of species also nest inland. Many—but not all—are found around people. Gulls have highly variable foraging techniques and diets. Terns forage in flight, swooping to catch fish or insects. They dive headfirst into the water for fish. Although they are likely to be near water, they spend less time swimming than gulls.
Rare winter resident.
Source of Bird Audio

An inhabitant of the far north, the Glaucous Gull is a large, pale gull with a large bill. The adult appears very white. Its back and wings are light gray, and the wingtips are white, with no black on the wing. The tail is white. The legs are pink, and the eyes are yellow. The bill is yellow with a red spot. In the non-breeding season, the adult's head is streaked with brown. Birds in breeding plumage have pure white heads and fleshy yellow eye-rings. The Glaucous Gull may be confused with the Glaucous-winged Gull, with which it hybridizes. Like most of the large gulls, this is a '4-year gull,' meaning that it takes 4 years to reach adult plumage, with a different sub-adult plumage each year. Juveniles are mostly white with buff markings. The first-year plumage is distinguished from that of a Glaucous-winged Gull by the distinctly bi-colored bill with a dark tip and a flesh-pink base. This plumage is the one most commonly seen in Washington.

The Glaucous Gull usually associates with flocks of other roosting and feeding gulls such as Glaucous-winged and Herring Gulls. A predator and a scavenger, the Glaucous Gull will steal food from other birds. It forages while flying, walking, or swimming. In flight, it picks items off the surface of the water and may catch smaller birds.

Pairs nest in colonies or alone on cliff tops, flat, rocky ground, ice, or snow. Both adults help build the nest, which is a mound of vegetation and miscellaneous debris, depressed in the center. Both incubate the 3 eggs for about 4 weeks. Both parents feed the downy chicks for close to 2 months. The young leave the nest on foot a few days after hatching, and they stay close to the nest until their first flight at 45-50 days, soon after which they become independent.

Some, mostly younger, birds leave the Arctic and move south for the winter, heading down either coast of North America, or to the Great Lakes. Many remain as far north as there is open water through the winter.

Glaucous Gulls are widespread and common in the far north where they are protected from human activities due to the remoteness. High Arctic habitats are slow to rebound from degradation, and these areas should be protected to maintain the population at its current healthy level. Populations in the eastern Bering Sea hybridize with Glaucous-winged Gulls.

The Glaucous Gull is a rare winter visitor in all lowland regions of Washington, found in both fresh and salt water and along sandy and rocky shorelines. West of the Cascades, you can see Glaucous Gulls from mid-November to mid-May. The Elwha River (Clallam County) and the Nisqually Delta (Pierce County) are areas with large congregations of gulls. Look carefully for Glaucous Gulls in the flocks. Between mid-November and March, they can be found east of the Cascades on Banks Lake in Grand Coulee (Grant County). Usually, single birds are found with large flocks of other gulls, and most are first- or second-year birds. 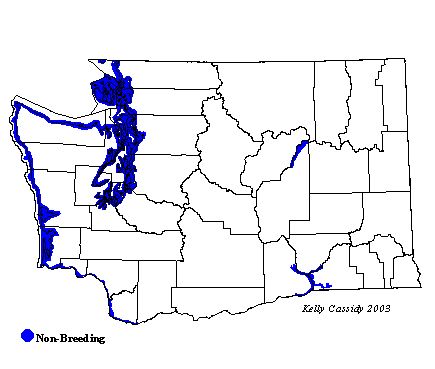